I know, I know. I’ve been back from Miami for four weeks, but I still post mostly Florida pictures. I promise that this is one of the last big Miami photo posts – I have a good feeling that spring has finally arrived even in Massachusetts, and I won’t need to long for the south as much anymore. On one of the days there my friend and I decided to go on a hop on/hop off tour through the city of Miami. Although we didn’t get to see the whole city, I still liked the relaxed atmosphere there. 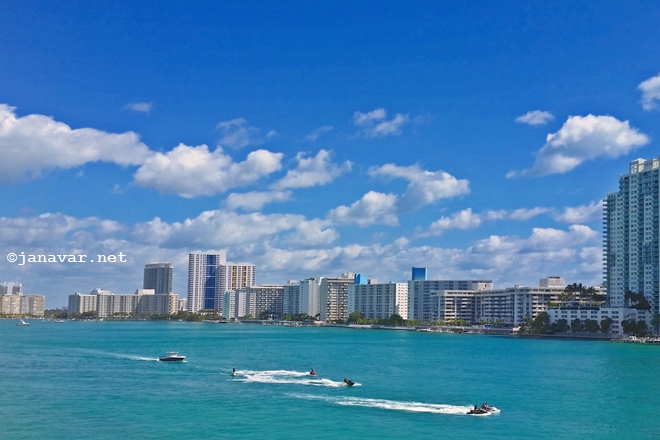 I am such a sucker for skylines, and especially for skylines with a great waterfront. I must have taken a hundred pictures only of Miami’s highrises and the sea. 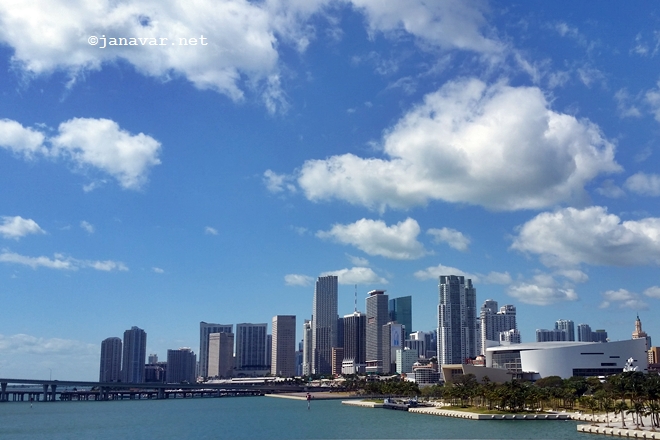 And there were so many palms, too. I love palms. At one point I was seriously wondering why the first settlers decided to stay in New England instead of moving to a nice, warm place in Florida. But apparently back then most of the state was still covered in forests in which dangerous animals lived. So I guess those first settlers were rather sensible by staying up north. 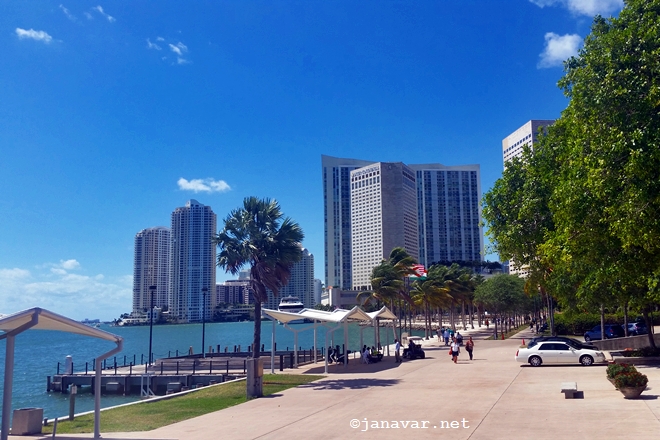 I guess they also wouldn’t have known how to deal with hurricanes, which the Sunshine State is famous for. Luckily, hurricane season is between June and November, so we enjoyed hot, sunny days. 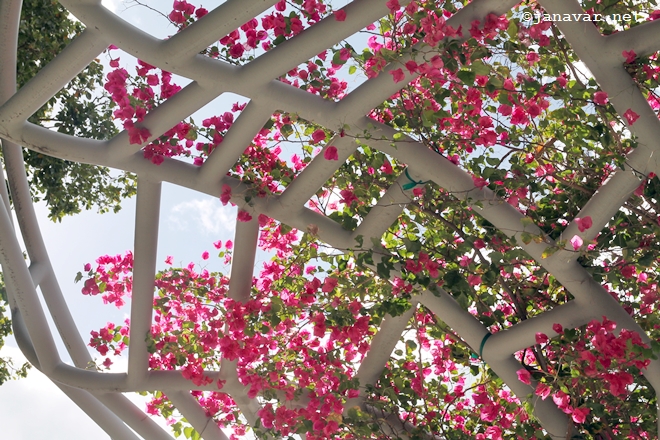 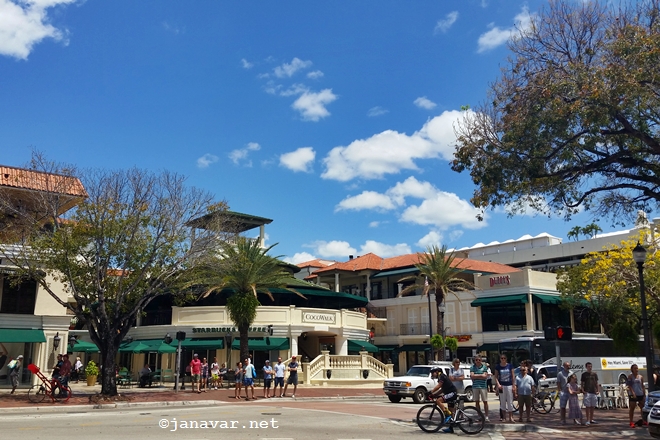 We hopped off the bus to have a closer look at Coconut Grove, a laid-back middle-class neighborhood. There were many small cafés and restaurants there. I especially liked the light colors of the buildings, and the cute, painted huts where for instance parking attendants stayed in. 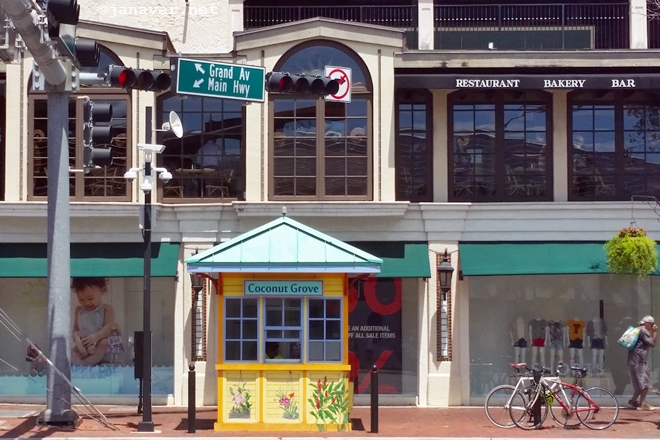 Also in Coconut Grove there is a great vegetation called hammock. Wikipedia defines this as “Tropical hardwood hammock is a closed canopy forest, dominated by a diverse assemblage of evergreen and semi-deciduous tree and shrub species, mostly of West Indian origin.” [here]. We found this little piece of forest very interesting, and almost expected Tarzan to turn up jumping from liana to liana. 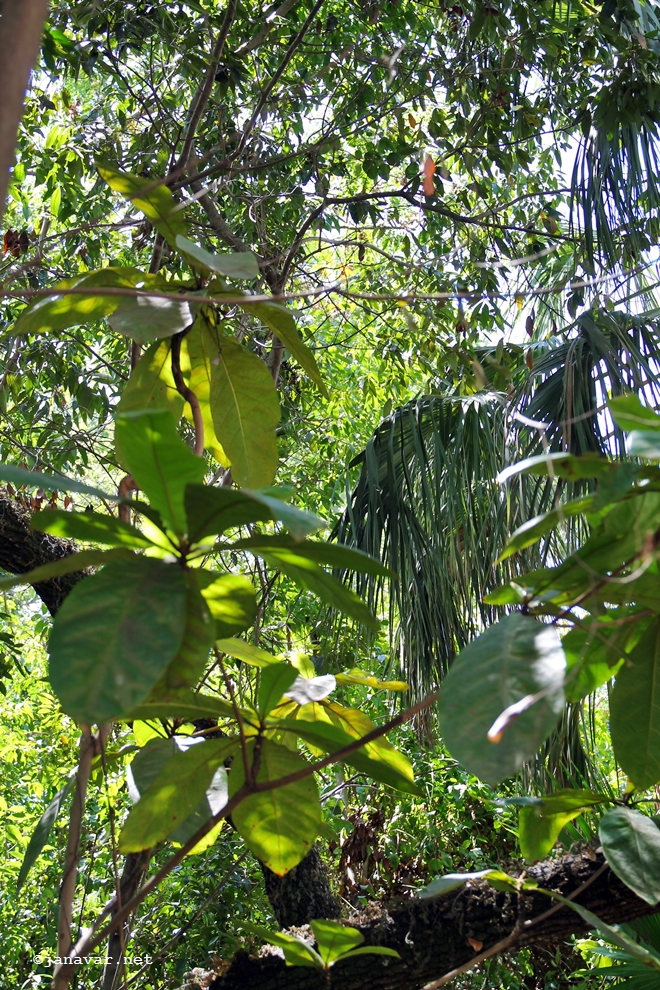 Well, we were disappointed. Nowadays, it is a little hard to imagine that the hammock once covered big parts of Miami whereas what is left today has to be preserved in state parks. 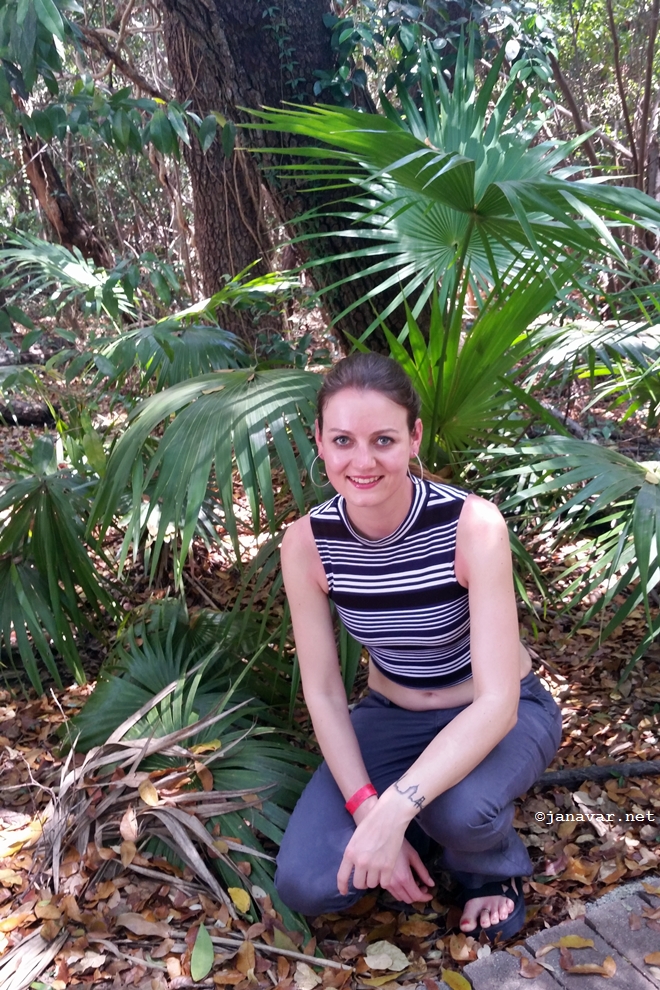 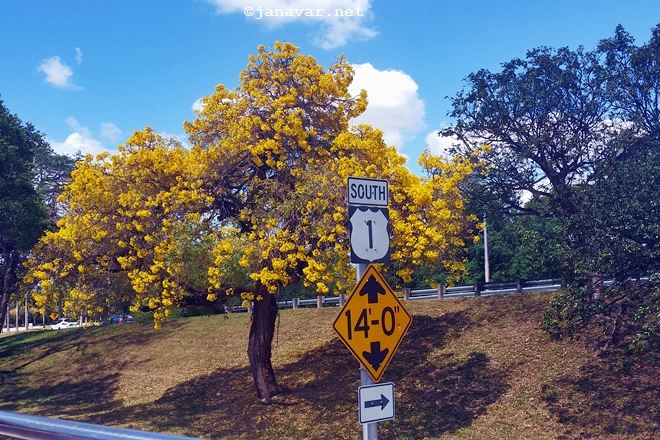 A few days later my friend also visited the Everglades, which I missed because I flew back earlier. The Everglades are a large tropical wilderness, or at least what is still left of it. But in Miami we also saw some small rivers where many alligators are said to live in. They even say you shouldn’t walk your dog too close to the water, or they might end up as food on a leash. 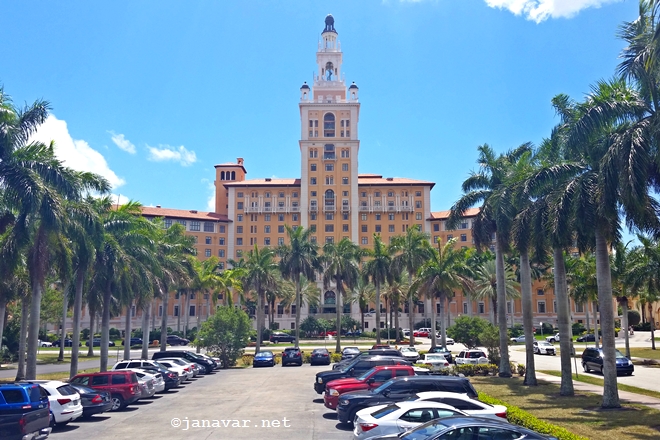 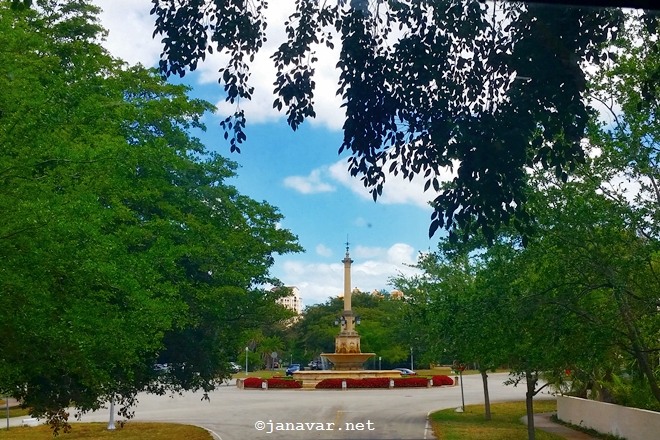 Later on we took a big break in Little Havana. That neighborhood which had been originally Jewish changed when many Cuban immigrants arrived in the 1960s. Today, its population is 98% Hispanic. There are many souvenir shops there, and many shops selling Cuban cigars. I was a little sorry that I don’t smoke cigars because they look impressive – but I just can’t stand the smell. 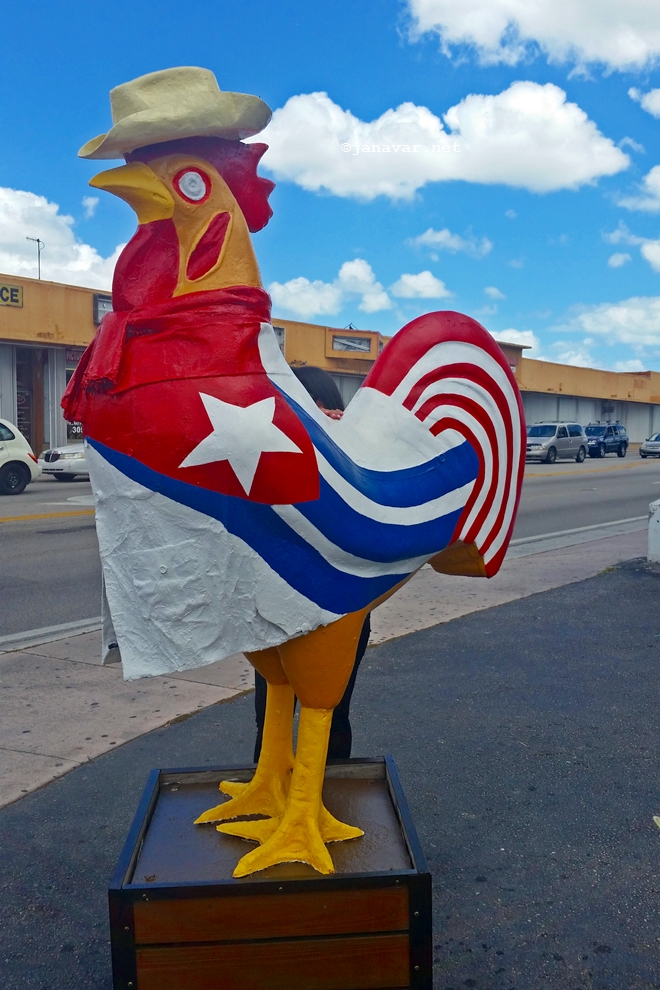 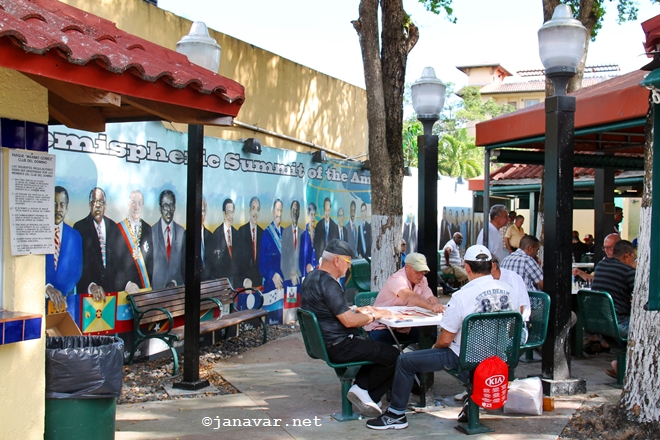 We had lunch in the famous Cuban restaurant Versailles. The restaurant is not only popular with tourists, but also with locals. There was a line outside, but we got a table after about ten minutes. What I really liked about the Cuban restaurants in Miami – besides the amazing food of course – were the moderate prices. You can easily afford eating out there. 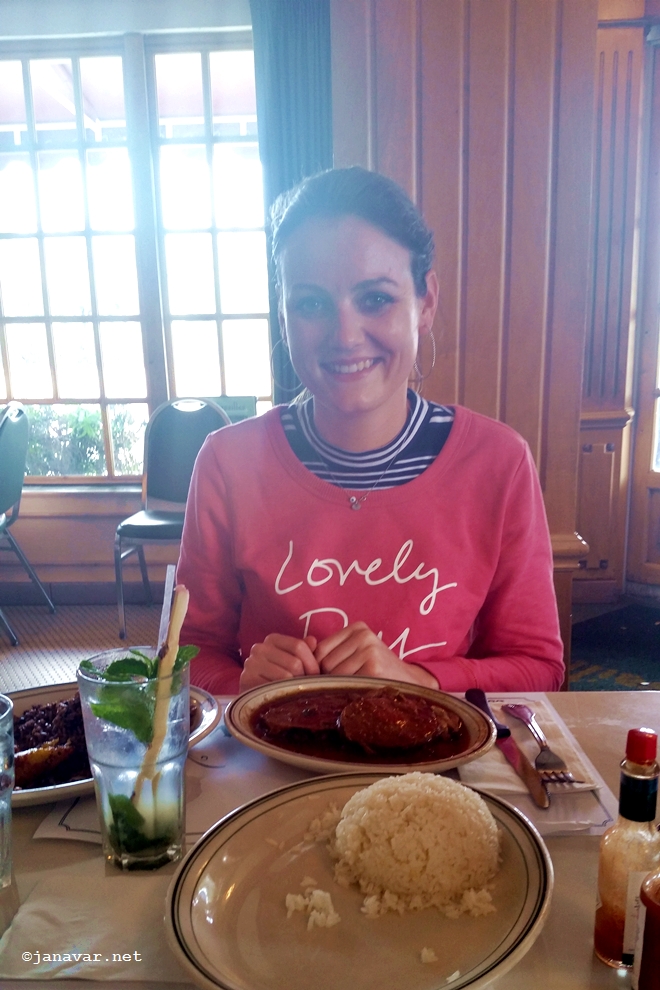 Later on we arrived at Bayside. Our tickets included a boat tour which left from there, and there is also a shopping center. Outside there was live music, and people dancing, or sitting in restaurants and enjoying the afternoon. 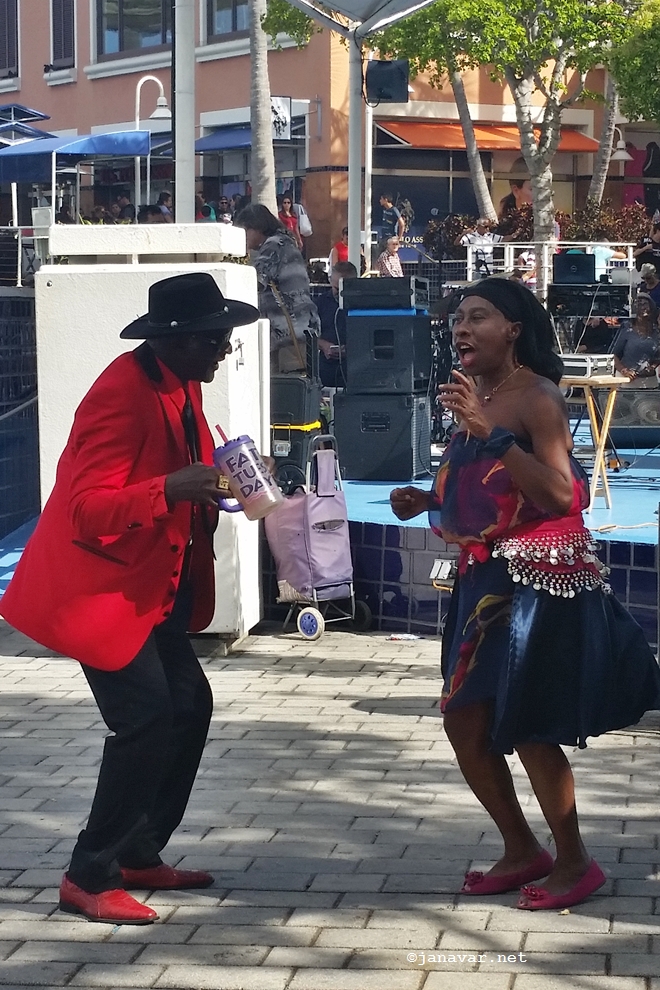 We went on the boat tour that showed us parts of Biscayne Bay, the bay between Miami and Miami Beach. 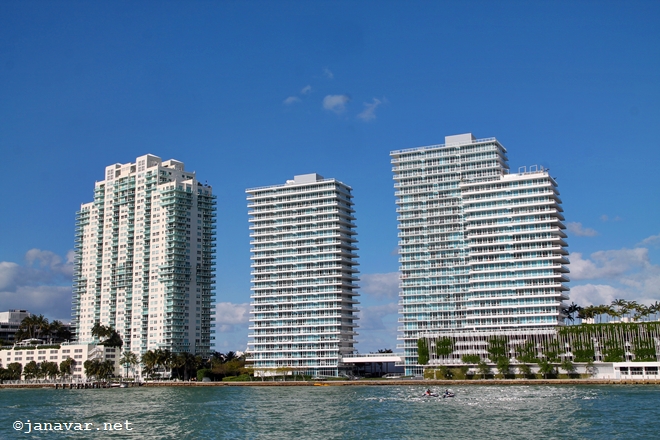 There are many small islands on which the rich and famous have their houses. I imagine it to be quite unpleasant that every day hundreds of tourists try to snap a picture of you in your garden. The guide named nearly all the house owners. 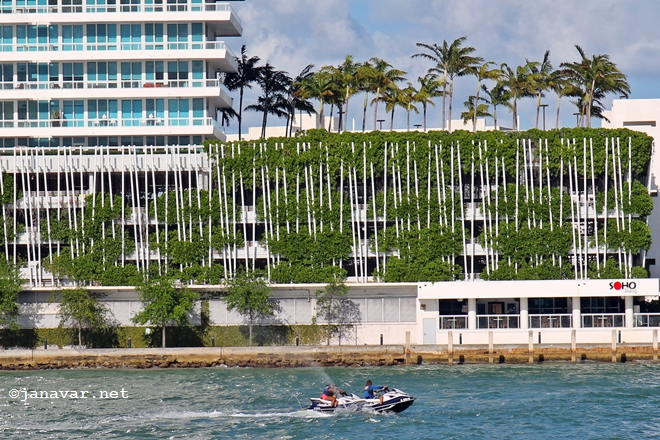 Although the mansions and gardens looked impressive, I didn’t take photos of each like most other tourists did. I still prefer highrises. If only I had the money, I’d immediately live in a skyscraper. Not ground floor of course. 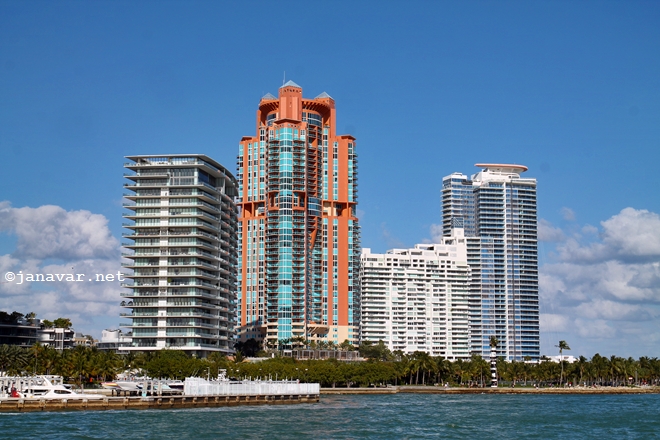 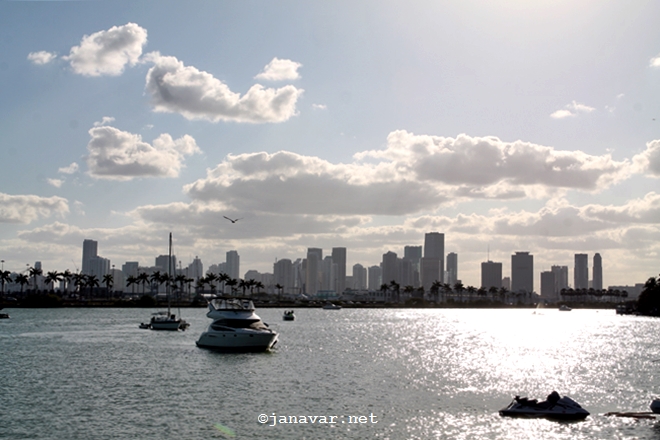 Right now Miami has the third tallest skyline in the US with over 300 buildings taller than 35 meters. After we had enjoyed looking at it from many angles, my friend introduced me to café con leche, a sweet coffee consisting of one part espresso and one part scalded milk. It is very delicious. Then we had a look at some shops, bought some souvenirs for ourselves, and eventually returned to Miami Beach after sunset. 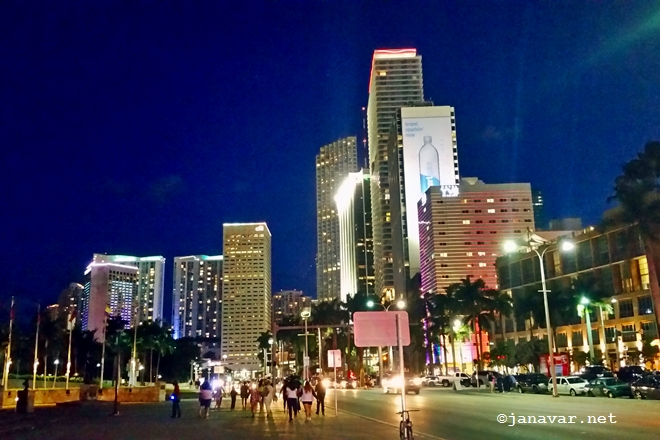